A Las Vegas parole board on Thursday granted U.S. football and screen star O.J. Simpson parole after nine years in prison for armed robbery and kidnapping.

"Thank you," Simpson gasped, visibly relieved just seconds after the decision was announced. The 70-year-old smiled wearily, waved and mouthed "I'll call you" to someone off camera as he was ushered out of the courtroom.

The decision was a quick one, announced less than an hour after the conclusion of his parole hearing.

"I am sorry that things turned out the way they did," Simpson told the parole board earlier in the day. "I did my time, I tried to be helpful to everybody. I'm sorry it happened, I'm sorry to Nevada." 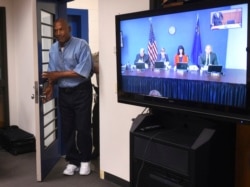 O.J. Simpson enters for his parole hearing at the Lovelock Correctional Center in Lovelock, Nev., July 20, 2017. Simpson was convicted in 2008 of enlisting others to retrieve from two sports collectibles sellers some items that Simpson said had been stolen from him a decade earlier.

The Hall of Fame athlete who was acquitted at the conclusion of a sensational murder trial in the 1990s cited good behavior while imprisoned on his convictions and told the court he wanted to be released so he could be with his family.

"I want to spend as much time as I can with my children and friends," he said. "I've done my time as respectfully as I can. I have not complained for nine years. All I've done is try to be helpful, telling the guys around me, 'Do your time, do your fighting in court.' ... All I want is to be with my kids."

Simpson said he was not daunted by the intense media interest in his case. Of offers to speak with reporters, he said, "I've turned them all down. ... I really don't foresee any problem dealing with the public now at all."

His daughter Arnelle Simpson told the court, "We recognize he's not the perfect man, but ... he's been a perfect inmate, following the rules and making the best of the situation. ... He is remorseful. He truly is remorseful and we just want him to come home so we can move forward, quietly."

Simpson could be released from prison as soon as October 1, although Captain Shawn Arruti of the Nevada Division of Parole and Probation told reporters the state generally does not announce inmates' release dates. Simpson is expected to move to Florida, where he has family.

Arruti said Florida parole officials have up to 45 days to decide whether to accept Simpson. He said acceptance rates are high when there is family in the area. 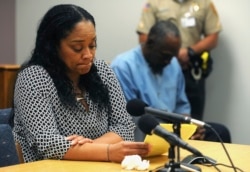 Simpson was convicted of armed robbery and kidnapping, among other charges, in 2008 after he confronted two sports memorabilia dealers in September 2007 regarding merchandise that he claimed had been stolen from him. He was given a nine-year minimum on his 33-year prison sentence.

In July 2013, Simpson had a parole board hearing regarding five of the 12 charges he was convicted of, and he said he regretted the 2007 incident. The board said Simpson was a low risk for repeat offenses and ruled in his favor on some charges, but not all. That meant he would remain in prison at least four more years, until his next parole hearing.

It has been a stunning fall from grace for the charismatic star, whose fame turned to notoriety following the slayings of his former wife, Nicole Brown Simpson, and her friend Ron Goldman in 1994.

O.J. Simpson was accused of the killings, in a legal process intensely watched by the nation, from a low-speed police chase on a California highway to his acquittal in 1995. He was later found responsible for the deaths in a civil trial and paid a penalty of $33.5 million to the families of the victims.

On Thursday, at Simpson's side in his bid for freedom, were lawyer Malcolm LaVergne, close friend Tom Scotto, sister Shirley Baker and daughter Arnelle Simpson.

"The Juice," as he was known, won the Heisman Trophy as the best U.S. college football player in 1968 and was enshrined in the Pro Football Hall of Fame in 1985.

He went on to star in commercials and movies such as the Naked Gun comedies and do sideline reporting for Monday Night Football.